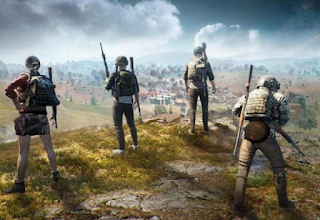 modbussid.com - PUBG is the latest game application that stands for Playerunknow's Battlegrounds. But most people know him only as PUBG. For the concept of the PUBG Mobile game itself has Battle Royale, which is the work of Brendan Greene, which is so famous among today's Gamers. This best game was released on March 23, 2017 on Steam, then for the final version, finally on December 21, 2017 this Android game began to slide with various interesting features.

Especially in 2019, the popularity of smartphone games continues to increase to more than the player range. As we saw last month on the Google Play Store, this game has been downloaded more than 10 million players. Well, for that we can expect that there will be new players popping up. Either the PC version of the PUBG player or using an Android Smartphone.

Have you ever played this cool game before? If not, immediately play a game that is so phenomenal with the concept of this battle roy on your favorite mobile. Want to play but don't understand how to play? Don't Worry, Particularly in the discussion in this article will tell you all the easy ways to play with PUBG on your Android are equipped with powerful tips and tricks to win in this sophisticated game. More details will be discussed below.

How to Play PUBG Mobile for Players

When playing we need to understand well - both the controls provided. If we look at the top, left and right there is a mini map, then next to it we can find a row of buttons for setting the game and turning on the speaker and mic. The other in the upper center there is a compass to show the direction, while the upper left we can see the status of the number of players we have managed to kill and who are still alive.
Furthermore, at the bottom of the right side there is a firing button and a button to duck, down, jump, and also refill weapons. While the left side contains virtual analog, button, and bag to access inventory. After understanding all the uses of the controller, make it a habit to continue playing and be proficient in using game controls.

Before we need to remember that our goal from the beginning was to outlive 99 other players. So, you need to land on the best Spot with good items so that you immediately do an intense battle by choosing to land rather to the edge of the Map to tend to be safer. For beginners it is better to jump by looking for the landing closest to the building to be able to get weapons and other equipment.

3. Equip yourself with the best weapons and equipment

If you do not know the types of weapons, you need to activate the "Automatic capture" feature because then you can pick up and replace stronger weapons and ammunition, helmets, vests, medical items and others. When entering a house, you need to be careful and close the door to avoid the enemy ambush. Instead you aim to ambush the enemy with the completeness of the weapons that you have.

If you have adequate weapons, you need to pay attention to other things, namely the narrowing of the safe zone, namely the blue circle, while the air strike is a red circle and the playzone is a white circle. How? Comb with the vehicle and slowly move to the safe zone. If you enter the red zone take refuge by entering a building until the attack is lost.

5. Shoot and survive Until the final process

At this stage you must find a good position to shoot and provide protection from enemy counter-attacks. If you meet an enemy from an open place, try to keep moving while continuing to aim, Don't just keep quiet because you will be an easy target.

This is the process of playing the game with advanced and easy PUBG mobile technology, you can immediately try and feel for yourself the impression of challenging play. To get it you can simply download it on the Play store application or Website that provides download links on Google, Chome, Mozilla, Opera mini and so on.